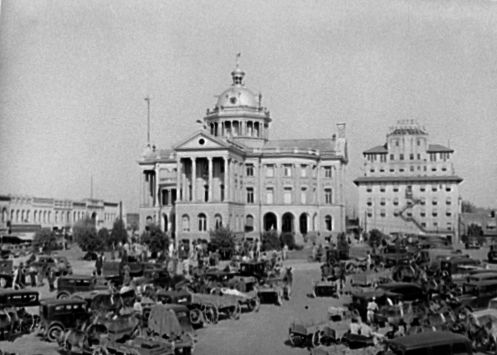 Marshall’s history began when the area received its first known settlers in 1839. In 1841 when a landowner named Peter Whetstone offered some of his property to build a courthouse, church and school. He worked very hard to persuade Harrison county officials to locate the seat of government in Marshall. Folklore says that that he may have had a little help from a jug of moonshine he offered to officials behind a hollow tree that sealed the deal. Whetstone’s friend, Issac Van Zandt laid out the city over 150 acres of land and named it Marshall in honor of John Marshall, the nation’s longest serving Supreme Court Justice. By 1850, Marshall was booming and was the fifth largest city in Texas and one of the wealthiest to boot. Marshall served as an important Confederate stronghold during the Civil War as a top meeting place for leaders and the makers of gun powder. Marshall is home to the old Stagecoach Road. The road sits some 12 feet below the tree line and was the main source of transpiration between Marshall and Shreveport before the Civil War. Between the 1870’s & the early 1900’s Marshall became a major regional marketing and educational center with colleges such as Wiley College, Bishop College, The College of Marshall (later renamed East Texas Baptist College then East Texas Baptist University). Marshall was the first city in Texas to have telegraph service with a line that liked to New Orleans. The population of Marshall exploded after leaders lured the Texas and Pacific Railroad into town, becoming one of the south’s largest cotton markets. Marshall is also the birthplace of Boogie Woogie music. Research was found indicating that the music emerged in the 1870’s in close proximity to the Texas and Pacific Railroad, which established its headquarters in Marshall in 1972.

Today, Marshall is home to many beautiful historic homes, sites and the picturesque 1901 Harrison County Courthouse which has been described as one of the most famous and admired buildings in Texas. The courthouse sits at the center of the square in downtown, is listed on the National Historic Register and is home to the Harrison County Courthouse Museum. The square is the gathering place for many annual events including the quirky Fire Ant Festival, famous Wonderland of Lights Festival, Market on the Square, Taco Fest and more. Downtown Marshall is home to many locally owned restaurants, coffee shops, specialty shops, antique stores and boutiques all with friendly faces ready to serve you. Outside of our picturesque downtown Marshall has many activities. Outdoorsmen and women will pine over the close proximity to area lakes including Caddo Lake, Lake O’ The Pines and Martin Creek Lake. Those who enjoy more leisurely pursuits will love tasting, shopping and sitting a spell at Bear Creek Smoke House general store. Just a hop, skip and a jump from Bear Creek is a true gem of East Texas, Enoch’s Stomp Winery and Vineyard, boasting 90 acres of beautiful rolling hills including 12 acres of grapevines. Pottery has always been a popular find in Marshall, made famous by Marshall Pottery which has sadly closed their storefront. However, the joy of watching master potters create works of art and shopping for your favorite one of a kind piece is alive and well at Martinez Pottery. Fine arts and culture has deep roots in Marshall. The Michelson Museum of art, home to artist Leo Michelson’s works of art, can be found at this world class museum. Live performances of all kinds take center stage at the historically restored Memorial City Hall Performance Center in downtown Marshall. Artist make, teach and display their creations at the Marshall Visual Arts Center.